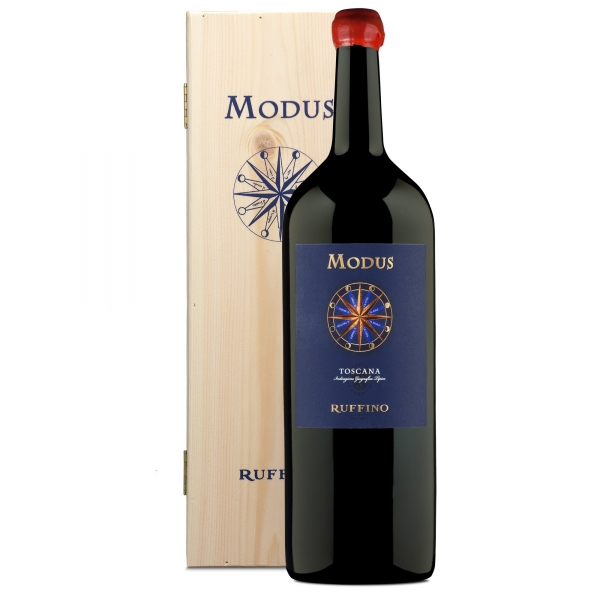 Modus is one of the jewels we are proud to produce. It is an intense and complex wine, pleasant since the early years but also destined to evolve in grace and subtlety, modern and yet deeply Tuscan. It's our supertuscan. Salmanazar.

Ruffino - Since 1877 - Award Winning Wines from the Heart of Tuscany

Ruffino was born in 1877 in Pontassieve from the intuition of two cousins, Ilario and Leopoldo. Their ambition is that the wine appreciated in their lands can also please those who do not have the good fortune to be able to taste it every day, and live, perhaps, very far.

It was an immediate and swirling success, built on the goodness of the wines and on an entrepreneurial foresight in the uncommon times. In fact, the Ruffino cousins' wine was immediately liked so much, so that in 1895 in Bordeaux the gold medal was awarded at the Chianti Ruffino.

Successes follow each other and already at the beginning of the twentieth century these successes lead to identify Ruffino as a synonym of Italian wine in the world through Chianti. These are the years of the birth of a true icon of Italian enology, Riserva Ducale, which in 1927 celebrates one of the most illustrious admirers of Ruffino, the Duke of Aosta who had chosen this wine to lay the tables of the court of the Italy King.

Riserva Ducale is just one of the imprints left by Ruffino in the history of Italian enology, also marked by the iconic fiasco, the bottle symbol of the entire category of Chianti, known in the world thanks to Chianti Ruffino.

Modus is one of the jewels we are proud to produce. It is an intense and complex wine, pleasant since the early years but also destined to evolve in grace and subtlety, modern and yet deeply Tuscan. It's our supertuscan.

Modus is a Latin word which means method, measure. It is indeed the wine with which Ruffino interprets the unofficial concept of Supertuscan: a balanced encounter between the elegance of Sangiovese, the structure of Cabernet Sauvignon and the soft silkiness of Merlot.

Also the label, which depicts a compass rose, emphasizes the concept that for a great wine the balanced meeting between different parts is necessary: ​​the vines, of course, but also the soil, the sun, the weather and the people.

Although Modus grapes come from the various Ruffino estate, the conceptual cradle of this wine is Poggio Casciano, the Ruffino estate where research and experimentation of agronomic and enological character has always been carried out. The idea behind Modus was as simple as ambitious: to create a great Tuscan wine, selecting the most suitable vines and soils for this purpose.

Although Modus is a relatively recent wine among the historic gems of Ruffino - its first vintage is in fact the great 1997 - Modus immediately established itself for the large number of awards received, both in Italy and abroad: a of his last years has been, for example, consecrated in the famous Top 100 of Wine Spectator as the twenty-fifth wine in the world.

Modus is considered a Supertuscan, but it is difficult today to define what this term means. In the '70s new and ambitious Tuscan wines saw the light as a reaction to wines with denomination whose production rules appeared oxidized for those who wanted to experiment with the aim of the highest quality with not necessarily native vines and using new wood.

These wines, which had common characteristics - international vines, a certain modern approach to winemaking, new and not least barriques, a rather high price - allowed Tuscany to become globally admired as a producer of wines of great ambition and, at the same time, he motivated the names, of which they were a reaction, to shake off a bit of dust and redefine themselves in terms that are no longer quantitative but also and above all qualitative.

Today the phenomenon is very limited and only the largest, including Modus, have surpassed the time and have established themselves as great interpreters, different voices, of a polyphonic territory like Tuscany.

12 months in barriques of first and second passage, French and American

Soft and silky tannins. Of great balance and freshness. Long and persistent finish, with an aftertaste of blueberry and cocoa.