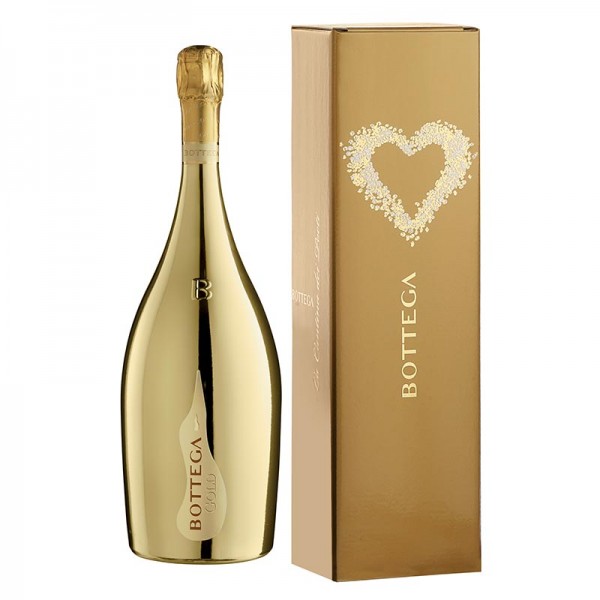 Bottega Gold is a Prosecco DOC, obtained from the white vinification of Glera grapes grown in the hilly areas of the province of Treviso. Bottega Gold has been defined as the "Spumante Glamor", as it is characterized by the unmistakable golden livery made with an exclusive metallization process that protects the wine from any source of light, preserving its aromas and freshness. Magnum Box.

Bottega S.p.A. it is at the same time a winery and a distillery, which has a close-knit team of expert winemakers both in winemaking and in distillation. The headquarters is located in Bibano di Godega (TV), in the Doc Prosecco area, 50 km north of Venice. The company was founded in 1977 by Aldo Bottega, master distiller with more than thirty years of experience in the field, which he had inherited from his grandfather, an expert wine merchant during the '20s, the passion for the world of wine. At the end of the '70s the company is a small company operating in the local grappa market.

In 1983, on the death of the founder, his son Sandro, together with his brothers Barbara and Stefano, took over the company. From an artisan reality, which operated only in the world of grappa, it has transformed over the years into one of the first 20 private wineries and distilleries. In the duty free and travel retail channel it has burned down the stages and, as far as sparkling wines are concerned, has become the second brand in the world, after a well-known Champagne brand. The unmistakable Bottega Gold, a Prosecco Doc characterized by the bottle with golden livery, is an icon of style that is appreciated throughout the world as an expression of the best Made in Italy.

Bottega Gold is a Prosecco DOC, obtained from the white vinification of Glera grapes grown in the hilly areas of the province of Treviso. Bottega Gold has been defined as the "Spumante Glamor", as it is characterized by the unmistakable golden livery made with an exclusive metallization process that protects the wine from any source of light, preserving its aromas and freshness.

Hills of Valdobbiadene, in the province of Treviso (Veneto)

From the end of September

The area of ​​cultivation of Glera grapes is located near the Venetian Pre-Alps and is characterized by long winters but not excessively cold and hot but not sultry summers.

The vine in these areas grows on soils of different nature, with a variability of soils, exposures, slopes that make this Prosecco a wine with many nuances.

Hilly terrain is subject to high temperature ranges between day and night. This difference in temperature makes it possible to develop finer, more elegant and at the same time more intense aromas.

The grapes are harvested by hand, allowing:

collect the grapes from the same vineyard at a later time according to the degree of ripeness;

select the bunches, collecting only the healthy and suitable ones;

protect the integrity of the grapes.

The pressing is performed in a «soft» way with low pressures, to extract the essential compounds from the body and the structure, avoiding high pressures with the risk of compromising the quality of the wine.

The must is kept at a low temperature in steel tanks and purified from substances that could develop heavy and unpleasant aromas.

The fermentation is carried out with the Martinotti method, in an autoclave, starting directly from the must (100%) and producing, during a single fermentation, the sparkling wine. The whole process lasts about 40 days and is conducted at a controlled temperature of 14-15 ° C with the addition of selected yeasts.

The unique fermentation, carried out starting from the must, allows to preserve the aromas it contains and consequently to find them in greater concentration in the finished product which will present a richer, more complex and persistent aroma.

At the end of fermentation, the wine is left in contact with the yeasts no longer active, which thanks to the process of autolysis release important substances for the body, the structure and the aromaticity of the wine.

Typical, characteristic and refined with note fruity (in particular green apple, pear, citrus), floral (white flowers, acacia, wisteria and lily of the valley) and close of sage and spicy.

Soft, harmonious and elegant, with a slim body and a well-harmonized acidity.

Excellent as an aperitif and for the preparation of cocktails, it is particularly recommended for starters, light first courses (such as pasta and risotto with fish or with non-aromatic herbs), accompanies second fish dishes steamed or raw, grilled white meat up to the side of stewed or fresh vegetables.