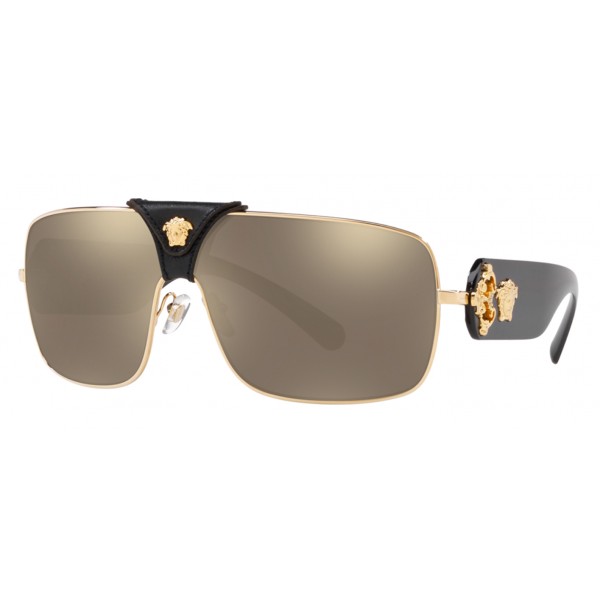 Aviator style sunglasses with mirrored lenses and Medusa embossed detail to attract all eyes ... on you. Auctions decorated with golden Baroque and Medusa details.

Versace - Experience The World of Fashion

The history of the Versace brand is first of all a family story that begins in Reggio Calabria in the ‘50s when little Gianni played in his mother tailor shop, where he learned the basics of the trade, because if it is true that in the years of greatest success he was called with just about any appellative, he always called himself a tailor.

In the same shop grew his older brother Santo, whose interest in fashion will be directed towards the management aspect, and the younger sister Donatella who followed in Gianni’s footsteps and for whom she was muse and right arm.

In 1972 Gianni Versace decides to depart from Calabria to go to Milan and work as a free lance designer initially making up a collection for a clothing firm called "Florentine Flowers". Versace's ready-made apparel was an instant success so the designer decided to stay on in Milan and the following year began collaborating with Callaghan, Complice, and Genny.

See the world through the eyes of Versace. The Versace sunglasses are the final touch of any look and are suitable for many styles. Made in Italy by the best opticians in the world, Versace sunglasses are modern elegance for the face. Explore the different frames, from aviators to masks: from cat-shaped eyes to rounded ones, passing through the most striking golden models with Medusa details.

Aviator style sunglasses with mirrored lenses and Medusa embossed detail to attract all eyes ... on you. Auctions decorated with golden Baroque and Medusa details.

Tip on Size or Measure