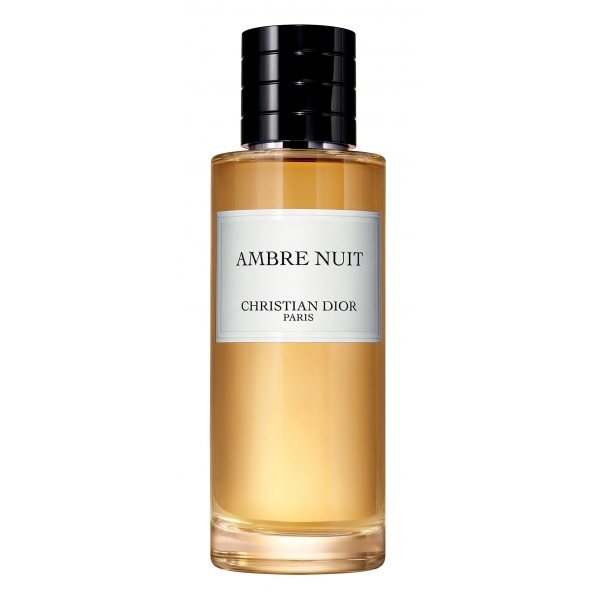 Ambre Nuit is an amber floral fragrance, enlivened by notes of delicate spices.

Ambre Nuit was born from a creative game started by François Demachy, Parfumeur-Créateur Dior. Amber wave and, at the same time, nocturnal, the fragrance takes its name from these two decisive shades of the personality of its creator.

"Ambre Nuit is the meeting point between two extremes, the olfactory expression, if we may say so, of beauty and the beast. Its fragrance combines the dark and feral facet of amber with the delicate velvet of the Turkish rose. It is a wave at the same time amber and nocturnal, a dialogue between strength and fragility. Opposites attract by creating a pair full of energy."

Oriental-floral. Ambre Nuit is the meeting between two extremes: amber, with a feral character, and Turkish rose, a source of refinement and delicacy.

The intensity of the perfume develops around the contrast between the floral accents and the feral notes. The fragrance, neither too delicate nor too wild, is a powerful and enveloping creation.

Ambre Nuit has different shades: the honey and gold reflections of amber contrast with the intense pink accents of the Turkish rose, imposing like a velvet tapestry.

Ambre Nuit is an oriental perfume. The immediate strength of the fragrance, ensured by the fermented notes of amber, is softened by velvety and sensual accents. His character is direct and, at the same time, secret.

Ambre Nuit is an amber floral fragrance, enlivened by notes of delicate spices.

"For each order of Maison Christian Dior fragrances in the 125ml, 250ml or 450ml format, you will receive a free sample * of the same fragrance. The sample will allow you to try the perfume before wearing or giving it away.

In the case of not full satisfaction, you can return ** the fragrance purchased, which must be in its original packaging, unused, unopened, in perfect condition and accompanied by the documents present at the time of shipment. "

* According to stock availability