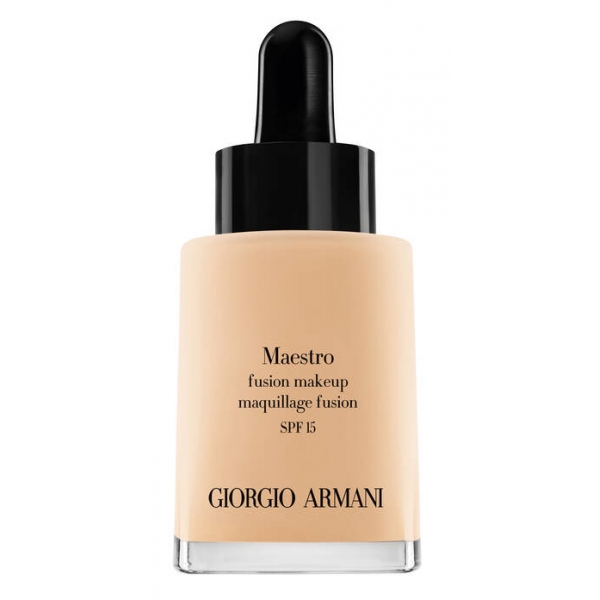 Brighten the complexion with a perfecting liquid foundation that gives the skin a natural radiance.

With more than three decades in the business, Armani has enjoyed a longevity as a designer experienced by few others. Some compare him to such fashion greats as Coco Chanel and Yves Saint Laurent. Armani stands as one of fashion's most distinguished leaders. He seems "almost presidential wise, serene and comfortable in his role as the reigning eminence of Milan fashion.

Giorgio Armani is worldwide the synonymous of Italian style and elegance. He is now at the head of a vast empire, not surprisingly the British call him King George and his is a kingdom which has lasted a very long time, precisely since 1975, when together with Sergio Galeotti he founded his brand.

Brighten the complexion with a perfecting liquid foundation that gives the skin a natural radiance.

Winner of the 2013 Prix d’Excellence de la Beauté Marie Claire for innovation, the Maestro liquid foundation is the revolutionary make-up created thanks to a patented technology, known as Fusion Technology.

From fabrics to cosmetics: a texture with a "no make up" effect, inspired by Super Organza. Presented during the Spring / Summer 2012 Privé Haute Couture show, it is the thinnest fabric in the world.

Maestro is more than just a matte foundation and is much more than a perfectioner, offering the properties of both:

- Water-free oils: 60% slow-release dry clear oils for a feeling of freshness, a non-oily finish and a pure color.

- 11% pigments for a perfect complexion. The absence of dust avoids the mask effect.

- The low surface tension facilitates and speeds up application.

the perfecting action exerted on the skin surface by soft particles that create a very thin corrective film, offering an extraordinary sensory experience.

Repeat the application until the desired coverage is achieved. Mix with